This questionnaire was originally submitted to five international designers, including Charles Eames and Joe Colombo, by curator Yolande Amic, in preparation for the Museum of Decorative Arts' inaugural exhibition "What is Design?" in 1969. Deeply influenced by its time, the original questions and answers to this questionnaire testify the birth of the discipline in the era of mass consumption. By facing this archive, Atelier Luma's designers propose a renewed vision of design and the role of the designer in the 21st century, which after an unbridled industrialization is confronted with an environmental emergency.

— What is your definition of ‘Design’?

I see this profession more and more, through the projects I lead, like a midwife. It is less and less a question of shaping material - aesthetics - but rather of bringing out, uniting and organizing, around common intentions and values, links and networks of skills, connivance and sociality. The majority of the projects I am currently working on highlights this dimension of collective and collaborative work. I am thinking of the project of the Maison des Petits in 104 in Paris, the forest wind houses in Fresnes au Mont in the Meuse, the school Le blé en herbe in Trébédan in Brittany with the Fondation de France, the Dar'hi in Nefta in Tunisia, the Mumo 2 or here in Arles with the Atelier Luma, DataBit.me and ACTUS (Association des Chevaux de Traits d'Union Sociale). So there is an increasingly local dimension that interests me a lot. It is clear that contemporaneity is no longer the exclusive prerogative of the urban world.

Of course, I also draw objects, but the objects are neither the center nor the purpose of the creative process; they are a possible actualization among others (an architecture, a scenography, an exhibition...) at a given moment, of a broader system of thought.

— Is Design an expression of art?

It seems that since Marcel Duchamp, it is the viewers who make the objects of art.

The notion of the object of art therefore comes down to asking the question of these worshippers, as we see with the moving of certain tribal objects in museums. But to paraphrase Robert Filliou, "Design is what makes life more interesting than design."

— Is Design a craft for industrial purposes?

Design is an autonomous thought and reflection before being a mode of production.

Design has often been considered only in terms of the history of forms or the history of materials and technological progress. Its history needs to be rewritten in order to set new paradigms.

— What are the boundaries of Design?

Personally, I don't have any, even if I will never draw projects related to tobacco or anything related to weapons!

— Is Design a discipline that concerns itself with only one part of the environment?

A priori we all live in the same environment.

— Is it a method of general expression?

Design can allow proposals to be considered in very different contexts. This is due to the designer's ability to think in a synthetic way, integrating notions from various fields.

Designers, through their ability to analyze uses and needs, are at the crossroads of several disciplines. They develop a global concept based on a personal and sensitive approach and are, as such, privileged interlocutors to help structures evolve. But there is no need to create oversized projects because it is in the gaps that they are at ease and that they intervene. By experimenting on a small scale in suitable places, by getting out of the predetermined roles of each person, they federate energies and build new networks of evolving relationships. It is in this sense that the designer's approach seems pragmatic to me: experience and action play an essential role. And to the extent, that experimentation transforms the experimenter, modifies and enriches his perception of the world, he is able to intervene more astutely on the real, without sticking on a pre-established and fixed doctrine. So I try to do things differently to think differently.

Hence my keen interest in pragmatism, a philosophy that favours experience and action, but also invention and creativity.

The individual is not an atom separated from others: he is constituted in the social fabric, he contributes to true individuality and its transformation through his action in return. It is therefore a question of inventing new logics to solve collective problems together.

The designer does not do projects alone. I am not an artist, even if I develop autonomous thinking. I take great pleasure in confronting the forces of use, integrating constraints and working from them. I also like to develop partnerships with artists such as Peter Halley, Mzryk & Moriceau or off-margin hoteliers such as Patrick Elouarghi and Philippe Chapelet.

— Is there a Design ethic?

Ethics is in life first and foremost, in our lives. However, I have no lessons to teach. Far be it from me to be moralistic.

It is up to each of us to think about the challenges and limits of our world. There are indeed emergencies and points of no return.

— Does Design imply the idea of products that are necessarily useful?

Poetry must be part of our world.

Design is above all a logic in relation to a context.

— Is it able to cooperate in the creation of works reserved solely for pleasure?

No doubt, but it's not the strength that drives me.

— Ought form to derive from the analysis of function?

Form is above all a social construction that unites a group around common aesthetic values, such as beauty, that evolves over the centuries: form is by definition excluding. The design of a project is the result of an alchemy more complex than form. In my relationship with objects, I have always worked on the notion of extended function. I have this intuition that one function per object is not generous enough and that multifunction is not the solution either.

Rather than the regularly repeated injunction to produce objects that "make sense", I prefer to work on reinventing the function. Instead of trying at all costs to symbolize a function by a form and to respect the codes of each sector (for example, a radio, evoking sound, will never be designed as a toaster that evokes warmth) I try to find, in the imagination, the power of uses. As soon as I graduated from school, I drew three objects that I called diffusers to focus on what they give and not what they are. This "domestic trilogy" was to complete the function of an object by giving it three dimensions: functional, poetic and imaginary. This project was a founding project. He made me realize that the designer's know-how lies largely in this dosage. The work then consists in taming the ingredients that make up an object so that they follow an intention, which is the very reason of its existence. This complexity of the creative process makes the work exciting. This requires great intellectual rigour. By approaching "furnishing objects", the extended function has quite naturally turned into in a life scenario. This allows me to make proposals outside the existing codes, but also to reaffirm the values of sharing or hospitality that are the foundation of my work. Moreover, the furniture is not considered alone, as a star, but in connection with the other equipment and furniture that structure the house. This naturally invites me to develop notions of modularity, fluidity, change, non-permanent devices that allow me to better qualify the space by making activities coexist rather than stacking or superimposing them. This is what I called life scenarios.

— Can the computer substitute for the Designer?

A priori, it is the man who invented the computer.

No. Design was considered at the birth of the industrial revolution, a period when the machine replaced man in certain tasks. Nevertheless, design has become rooted in certain social choices and has become a key factor in the development of the company.

— Is the purpose of design to modify an old object with new techniques? 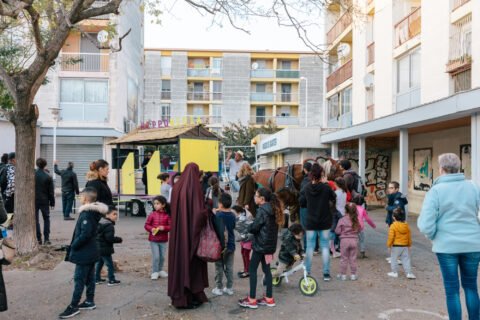 — Is Design used to fit up an existing model so that it is more attractive?

Maybe, but what does that mean ? Attractive to whom? If, for example, the goal is to make condoms essential to prevent transmission of communicable diseases, in that case, this attractive power, makes sense.

What interests me are the usage scenarios.

This approach of proposing life scenarios is applied to objects in use scenarios. The knife edited by the Forge de Laguiole that I made with Pierre Hermé is an example of this. He accompanies us for a moment of sharing: first he cuts the cake part and then by turning it a quarter turn, he becomes a pie scoop allowing a very fluid movement. This example shows us that we may be putting too much effort into hyperspecializing our objects and structures when it would be more appropriate to work on transitions, on fluidity. Form and discourse on form distract from the real issues. The objects must be in direct contact with life and not only in appearance: appearance of mobility by simply adding two wheels to an existing table that does not have the space to expand in space anyway, appearance of comfort by coating everything with soft skin to especially not change the established domestic order..... As such, the cocoon house is dangerous if it locks us up and transforms us into a selfish being, not inclined to trade with the outside world. Comfort also lies in the potential to be able to change, to evolve, to fulfil yourself in the domestic environment.

For me, design is political, a way of engaging with the world through choices.

The designer lives in the world, of course by his choices and his work he can express a commitment or a proximity with ideas.

The city is a territory that interests me, because it is a crossroads of wealth, competence... I think the city as a territory of projects and optimism.

I am interested in the thought of rural areas redevelopment. A lot is said about the injection of culture into historic buildings, but interventions in rural areas go beyond the dynamics of tourism, it addresses real social issues and life in general.

I see it through the projects I have led, whether they are projects within the framework of the Fondation de France's New Sponsors program, such as the capsule dovecote in Caudry or the Le Blé en herbe school in Trébédan, or the apiary in Nègrepelisse or the woodland houses of Le Vent des Forêts

Rurality is currently a space that has been so badly affected by development choices that it has become a territory to be reinvented.

The collaborative aspect allows us to become active again on our environment.

— Does the creation of Design admit constraint?

I have always considered coercion as something exciting, as a strength and not as a weakness. Freedom is a decoy. I always think in terms of context.

— Are there tendencies and schools in Design?

The strength of French design is the heterogeneity of its individualities.

A priori to drink tea, you can do without the teapot, but you will always need a bowl.

— How would you define yourself with respect to a decorator? an interior architect? a stylist?

What drives my projects is a global logic.

— To whom does Design address itself: to the greatest number? to the specialists or the enlightened amateur? to a privileged social class?

Design has nothing to do with social classes. I consider my work in the richness, working on a university canteen, a mobile museum, collections for the mass-market like Tex or Ikea or by contrast with factories such as Sèvres.

— Have you been forced to accept compromises?

A project is born of constraints, I don't call them compromises. If the project is built around a strong spine, a natural logic is established.

— What is the future of Design?

The future I just allow myself to consider it in my projects, I am not an oracle.