The week of May 22-27 brought the first edition of LUMA Days to Parc des Ateliers. LUMA Days is a public engagement platform located at the intersection of art, design, technology, activism and ecology that brought together a wide array of local and international experts to think and work with the theme ‘Scenarios for a City in a Bioregion.’ In addition to the first Atelier LUMA Open House, the week featured: IdeasCity Arles in collaboration with the New Museum, SIPPA (International Salon for Preservation and Heritage in Arles) and Scenario 100, a prospective scenario planning exercise. It was an opportunity for Luma Arles to begin contributing to the broad processes of imagining and constructing the future of this city in transition. 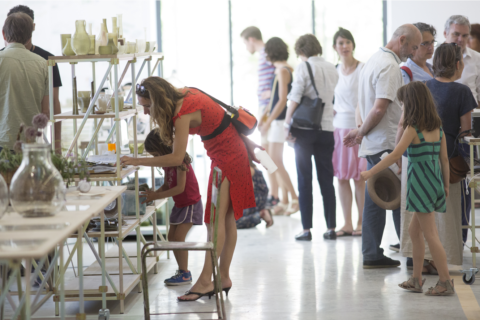 For Atelier LUMA the week has been a grand crescendo of many months of ideation and hard work. At times a comedic cacophony, the experience was ultimately a beautiful symphony that was satisfying for everyone involved in its production, and captivating for the visitors who witnessed the outcome.

LUMA Days began with the Mécanique in full (and noisy) production mode. Designers continued their work with various objects and materials, and the modular furniture and scenography was completed that eventually provided a structure and frame for everything else. Meanwhile, the rest of the Parc des Ateliers was host to dinners, exhibition debuts, salons, working groups, discussions, presentations and celebrations. By the end of the week most of the production in the workshop ceased, as the space was transformed into a beautiful and coherent exhibition that made the initial processes and products of Atelier LUMA legible to the public. This Open House was the first opportunity to share the work since its initiation in the summer of 2016.

With every curious person who entered the Mécanique, with each connection that was made, and with each moment of knowledge exchanged and passion expressed—these days have proven that the values and intentions of Atelier LUMA are alive and thriving. These days provided opportunities to glimpse into the future and to imagine the potential yet to be realized.