Atelier LUMA is participating in the World Economic Forum in Davos this year, from January 21 to 24, 2020.

We are presenting the Algae Platform, launched to study the potential for algae as a substitute material in architecture and design applications. Founded in Arles and deeply rooted in the Camargue region – a vast reserve of internationally significant wetlands – Atelier LUMA’s Algae Platform has developed and evolved to become a transnational platform with major key partners in the Mediterranean region and beyond.

On the occasion of the World Economic Forum in Davos, Atelier LUMA is presenting a reflection into its processes, methods, and contexts, in the form of a living installation made up of elements from its own unique assortment of biomaterials. The exhibit shows living micro-algae, the materials transformation process, and possible industrial and artisanal applications, explored in several of Atelier LUMA’s research projects, including those focused on textiles and salt. There will be a particular emphasis on the process of using algae and other natural materials for the extrusion of filaments. The filaments extruded using this process will be shown here in several different forms and applications, including in a layered map illustrating how the Atelier interacts with its city and bioregion.

The map was drawn by the design duo AATP and printed, embroidered, and woven with inks and thread created from local algae at Atelier LUMA. The curtains presented are made in part from a piece of 100% Arles Merino wool fabric, and 100% bioplastic fabric made with an algae additive. The modular furniture developed by Lukas Wegwerth at Atelier LUMA, called III+1, will also be presented as both a stand and a part of the exhibit in its own right, along with objects created from scraps of algae bioplastics.

Finally, the flooring of the stand is made from Camargue salt crystals pigmented with dunaliella salina, micro-algae that are emblematic of the Salins de Giraud salt marshes where Camargue salt is produced. 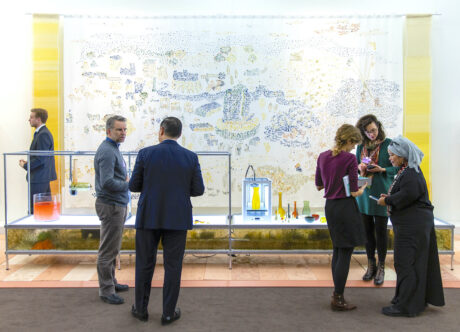